A Study of Software Testers 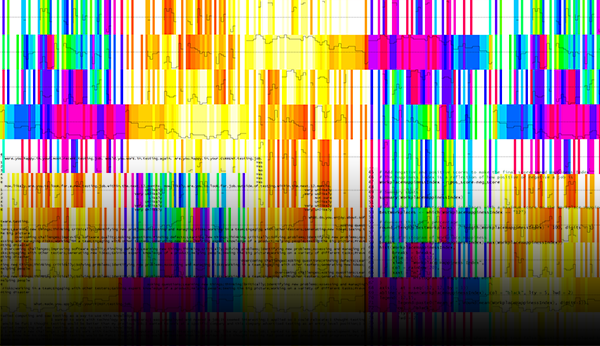 Why is it really difficult to hire testers?

A few months ago I found myself involved in a number of discussions not about testing, but about testers.

All the conversations I had revolved around the following questions:

I had my own thoughts and opinions about the answers to these questions so I immediately drafted a blog post. It was all about testers and based on my own personal experiences and conversations with some of my friends that work in testing.

It got me thinking about testers in the workplace and the challenges we face every single day. I thought about the best and worst testing roles I had previously held. I considered how these jobs had changed my outlook on testing.

I considered publishing this draft blog post, but I felt something was missing. I had spoken to some tester friends on Facebook to get their opinions and compared their experiences to mine, but I still felt uneasy. I asked myself how could I make sweeping statements such as "most testers do not have a degree in computer science" based solely upon my own subjective personal experience and opinions. The simple answer was I couldn't. So with a heavy heart I didn't publish that post. Even so, I still found myself unable to stop thinking about these questions that I really wanted to know objective answers to.

I decided to do some research into testers and the challenges we face in the work place to find some answers. I created a survey on Google Forms and distributed it to testers via Twitter, Slack chat, social media and word of mouth. I knew from the start that I wanted this project benefit the testing community so I also decided that I would make all the raw data available on Github. I wanted everything to be transparent so that other people could also potentially use the data for their own analysis.

It was very important that anyone responding to this survey could not be personally identified as sensitive questions about work were asked. I found that because the survey was conducted in an anonymous way, a lot of testers were actually very happy to help fill it in for me. But what was even more amazing was that testers also wanted answers and passed the link to the survey on to other testers they knew.

The survey ran from 4th May 2016 until 20th May 2016 and was completed by 187 people. The number of testers that responded honestly astonished me. I am very proud and thankful to be part of such a helpful and supportive community. My sincerest thanks go out to everyone that helped by taking part.

If you are interested in the raw data collected by my survey, this can be found on Github as survey_results_raw.csv

The whole time the survey was running and collecting data I knew that I was going to need to carry out analysis and crunch the numbers to see if the data collected answered any questions. I studied Maths with Statistics at A-level so had some pretty basic knowledge of statistical analysis. I was however concerned about having to manipulate large amounts of data in Excel. This lead me to investigate learning a programming language called R. The book I worked through and used as reference was Learning R by O'Reilly. The R script I wrote, named survey_analysis_1.R, is also available on Github to support my research and make my findings reproducible. I have included my commented R code as some people may find it interesting or useful to see how the charts and graphs were generated.

The actual survey results contained so much data that I could probably write volumes about testers in the workplace. Instead, I thought it was wiser to try use the survey data collected to answer one question per blog post.

The first question that I specifically wanted to try tackle was "Why is it so difficult to hire testers?"

Our survey says: not all testing jobs are equal

In the survey I presented testers with 12 positive statements about testing in their workplace such as "When I make a decision, I feel my judgement is trusted." and 12 negative statements such as "I am usually excluded when decisions are made." I asked respondents to answer true or false to this set of 24 questions. One point was scored for answering true to a positive question and one point subtracted for answering true to a negative question. This resulted in each tester achieving a score ranging from -12 to + 12. I named this score a tester's "Workplace Happiness Index". To score +12 a tester would need to say all the positive questions were true and none of the negative questions were true.

The frequency histogram below shows the Workplace Happiness Index of 181 testers. 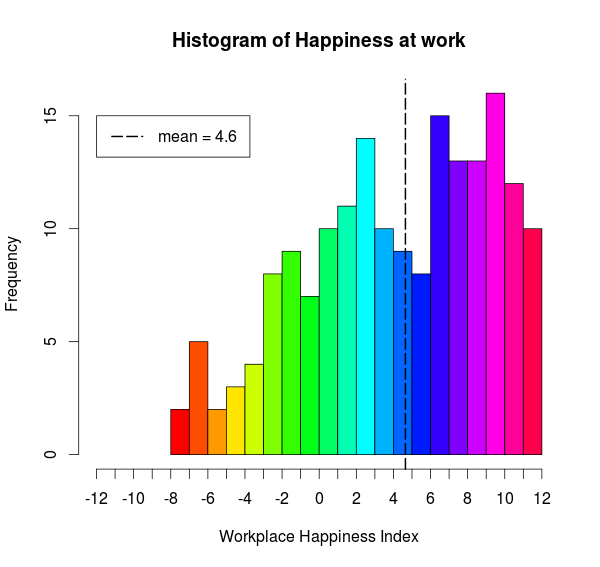 One of the questions asked by the survey asked was "Are you happy in your current testing job?". 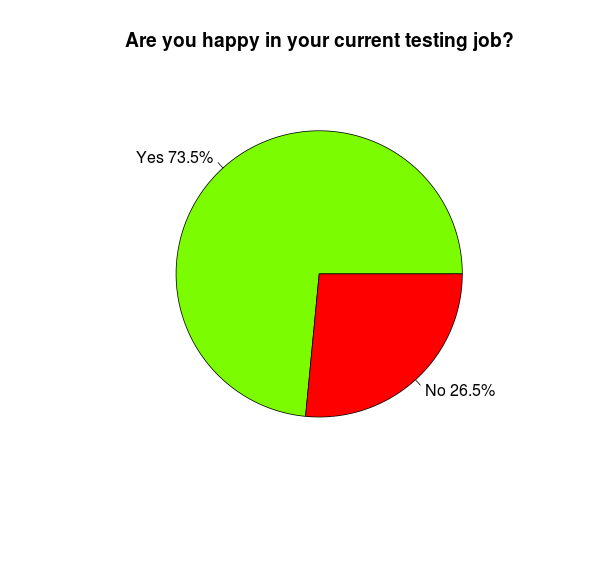 I used a box plot to visualize the relationship between a tester happiness and their workplace happiness index. A box plot is a way to show patterns of responses for a group. The groups in my box plot are Happy and Not Happy Testers. The thick black lines inside the coloured boxes show the median or mid point of the data. The coloured boxes represent the middle 50% of scores. The circles show outliers which are observations that lie an abnormal distance from all the other values in the group. For the Happy tester group there is one outlier, this is a single tester that said they were happy despite their work place ranking -7 on the Workplace Happiness Index. There were also two testers which said they were not happy despite their workplaces scoring +10 and +11 on the workplace Happiness Index.

The box plot does show a strong connection between how positive or negative the tester's workplace is and whether the tester working there say they are happy or not.

One theory I had in my original draft blog post was that it was difficult to hire testers because testers were very unlikely to change jobs for a number of reasons. I thought some testers would be reluctant to change job in case they found themselves jumping out of the frying pan into the fire by moving from a workplace with positive traits to one with more negative traits.

I divided testers into groups based on their likelihood to look for a new testing job and measured these groups against the workplace happiness index. The box plot below shows this data. 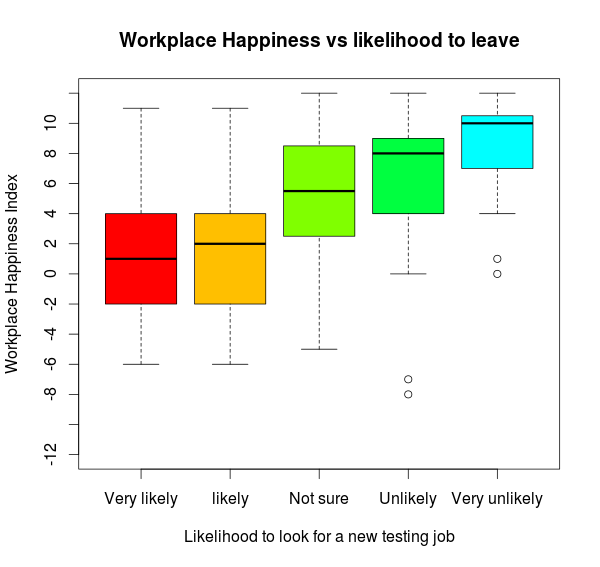 There definitely was a pattern between negativity in the workplace and testers looking for new testing jobs:

On the Workplace Happiness Index from -12 to +12 The median values were as follows:

So lets summarize the data that has been crunched so far:

I wanted to know about the new testers that were coming into the profession to fill the jobs that experienced testers were not moving into. The survey asked "How much testing Experience do you have" and the responses to this question have been plotted below. 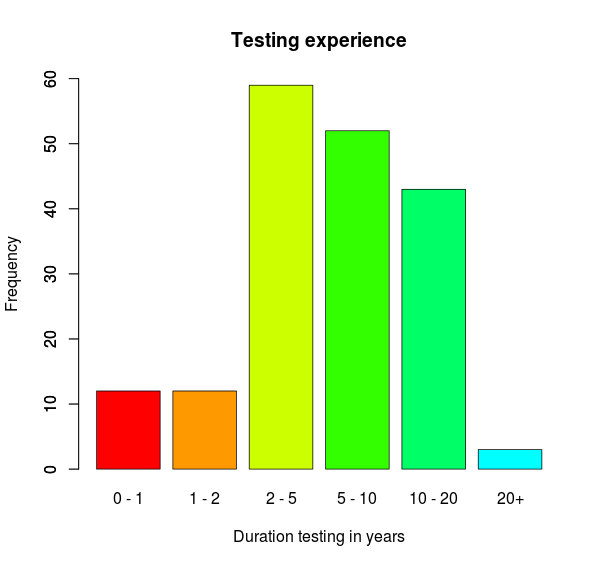 The graph above shows that there is certainly a lack of new testers within the profession. 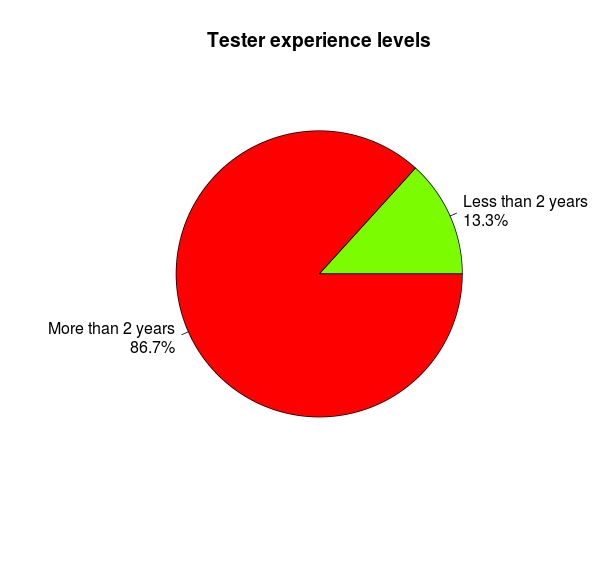 I found these numbers a little disturbing. Perhaps the "you must have two years experience" barrier imposed in most job adverts is very difficult to overcome and currently serves as a gate blocking new people from a testing career path. It feels like as an industry we are not providing enough opportunities for people to move into testing. What will happen when all the testers that have been testing 10+ years start to retire? I can only see it becoming increasingly more difficult to hire testers in the future if the number of people entering the profession does not increase.

I feel very proud because I can honestly say that my current employer actively recruits graduates with no previous experience and provides training for them. This training is not just for the developer path but there is also a graduate software testing training path too. Another initiative at my company which started this year was to launch a paid software testing internship over 12 weeks, designed to give a "taste" of a software testing.

More companies need to be aware that when the testing jobs they seek to fill are not ranked highly on the workplace happiness index, they simply won't be able to hoover up the best existing talent in the industry. Employers which are struggling to hire testers will need to either start growing their own testing talent or improve testing in their workplace to the level where working there is better than working elsewhere. I certainly think that providing in-house training and mentoring is one way the difficulty of hiring testers can be eased.

A company can mitigate against the fact that it's hard to hire testers by making testing in their workplace a more positive experience. The survey conducted proves that once the positivity in a workplace reaches scores of 8+ on the workplace happiness index, testers become unlikely or very unlikely to leave.

The following actions contribute to a higher workplace happiness index:

If a company wants to be above average in terms of positivity and happiness they would need to at least apply 17 out of the 24 above actions to their workplace (based on the mean workplace happiness index of 4.6)

So far I feel like I have only scratched the surface with this data set and I intend to continue exploring this data in future posts.